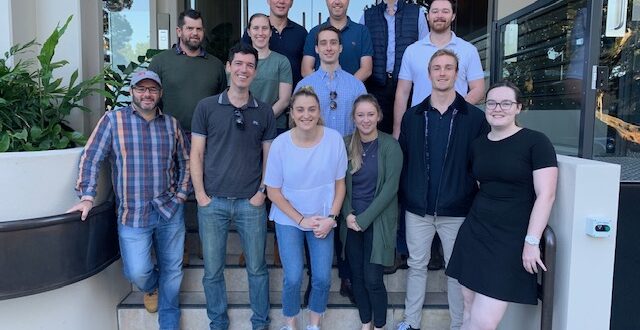 Our Town Planning team set off on a bus tour on the 28th April. We visited a number of sites where our team played an important role in delivering the projects. It was fantastic to be able to see these projects delivered on-ground, and fortunately we were lucky to have perfect weather for our day out of the office.

The first stop took us to Aria Property Group’s Tree House apartments in West End where the Development Manager, Tom Salmon showed us through the building, providing insight behind certain design features and complications tackled during the development process. Tree House is a perfect example of the quality and care Aria put into their developments, providing residents with the best possible living experience.

Our next stop was not too far away, taking us to Queensland Ballet’s temporary site in West End where the dancers eagerly await the redevelopment of the heritage listed Thomas Dixon Centre, future home to Queensland Ballet. This development was delivered with the assistance of SHG’s Springfield Regional Manager, Nick Christofis through an infrastructure designation process.

Following the mornings stop-offs in West End, the team made their way to the southern Brisbane suburb of Pallara, where Principal Planner, Ashley Lovell worked with developers Penfold Property Group and KDL Property Group. The developments here involved subdivision and dwelling house products, leading the way for future development of the emerging community suburb.

Further south, travelling into Logan, the team made our way to Everleigh, a residential estate by Mirvac. Immediately as we approached the site, everyone on the bus was impressed by the level of detail put into the landscaping at the entry statement and further throughout the estate. Stopping off at the sale’s office, Mirvac’s Jason Augustine detailed the process of refining several master plan revisions and delivering key transport corridors to connect the 3500 lot estate.

North-east of Everleigh, we made our way to Carver’s Reach, a residential estate by Golden Gate Property Group. The key feature of Carver’s Reach is the hero park which presents itself at the entry off Park Ridge Road, designed by SHG’s landscape team including native trees, play equipment, basketball court and even a flying fox. In addition to this, a complex stormwater basin designed by Arcadis, ensures high quality filtering and detention of runoff from Park Ridge Road and Carver’s Reach estate. SHG’s Michael Forwood has worked closely with Golden Gate’s David Whiteman from the start to ensure ongoing quality as future stages of the development await.

After taking a break from sightseeing, the team headed for lunch at the Kiwanda Café, which is part of the brand new, multi-million dollar roastery and headquarters of Zarraffa’s Coffee, and soon-to-be location of the eagerly awaited Distillery Road Market – a new fresh produce, dining and entertainment precinct adjoining the Beenleigh Distillery.

Following lunch, we were now rejuvenated and drove north on the Pacific Motorway to Rochedale where Michael Forwood and Ashley Lovell described the history of the suburb as well as the planning challenges faced while delivering the now well-established suburb.

On the way to our final stop of the day at Northshore Hamilton, a strategic layover was made at BrewDog in Murrarrie where the team bonded over some craft beers, reflecting on the highlights and learnings from the morning.  Once we arrived at Northshore Hamilton, Principal Planner Anna Havill, who works closely on projects with Economic Development Queensland in the area, provided the team with a bit of history on MacArthur Avenue, temporary uses and future developments which Brisbane can look forward too.

It was safe to say once we arrived back at 9 Thompson Street, everyone was well and truly exhausted from what was an unfamiliar Wednesday at work. The bus tour provided the team with insights into other projects and the finer detail on how planning challenges were tackled, developments were delivered and lessons learned through the process.